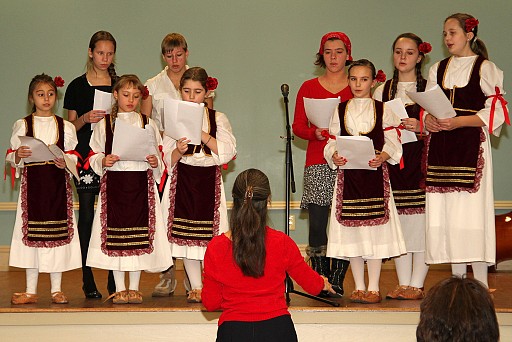 The Children’s Choir Program began on Sunday, March 30th, 1997. Interested members met this day for the first time. The goals of the program were twofold and have changed little to what they are today: to familiarize the youth in our community with the liturgical music and cultural practices of our church, and to learn some fundamentals of singing and musical performance. The main focus of the program is to help make our church services a meaningful part of each participants life, and to do so in a creative and enjoyable manner.

In January of 1999, The Children’s Choir sang for the first time at the annual St. Sava Program. It was also at this time that the youth choir adopted the name of St. Sava the patron saint of our Sunday School and became the St. Sava Youth Choir.

Over the brief history of this group, the repetition of annual holidays and services has shaped the yearly rhythm of the St. Sava Youth Choir program. In the fall, the young members learn the routine of weekly rehearsals while preparing to sing for the Divine Liturgy on Serbian Children’s Day (in December) and the St. Sava Program (in January). Starting in February the young singers begin practicing, among other things, the Paschal Troparion and hymns about St. Thomas in preparation of singing during the Liturgy on St. Thomas Sunday (first Sunday after Pascha). The group has been singing for this service since 1998. At the encouragement of the director of the S.S.S. Marinkovich Choir, and to the delight of the St. Sava choir members, the youth choirs participation on this day has increased to include a significant part of the service.

After Pascha, the focus of the youth choir year shifts to folk music. For the past two years, the group has been pleased to be able to perform this music for the St. Nicholas Seniors at their June Potluck. In the fall of 1999, it was decided that the young group should pursue some type of outreach to the institution-bound members of the church. In December of that year the Youth Choir went caroling at the local county home, Dauphin Manor. The group sang for the aged members of our parish and other residents living there. The Youth Choir has continued this practice annually and it is an event the members look forward to every year.

The young choir was graciously invited to sing for the Badnje Vece (Christmas Eve) Services in January of 2000 at our sister parish. The Holy Resurrection of Christ Serbian Orthodox Church in Lebanon, PA. After singing for the church services, the group performed a short program of Nativity Hymns and Carols. The youth choir returned to sing for Badnje Vece the following year as well. Both years the group was very well received.

On April 29, 2001, the young singers were honored to perform as part of the musical entertainment for Fr. Srboljubs 25th Anniversary Banquet. The highlight for the youth choir was performing one of its numbers, Jedno Dete Malo, with the local (homegrown favorite!) tambura group, Sviraj.

Over the few but full years of its existence, the number of members in the St. Sava Youth Choir has ranged from 5 to 14. But no matter how small or how large a group it has been, the focus remains the same: to touch each young heart with the beauty of our church’s sacred and cultural music.

May the youth choir members gain through this experience a profound appreciation and respect for their religion and culture, and an indelible love for their Savior, Christ our God.